a text which contains about story (fiction/non fiction/tales/folktales/fables/myths/epic) and its plot consists of climax of the story (complication) then followed by the resolution. A narrative text is a text amuse, entertain and deal with actual or vicarious experience in different ways. 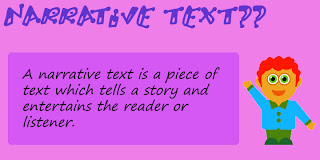 Contoh Narrative Text:
Ali Baba
Once upon a time there were 40 cruel thieves who put their stolen money and treasures in a cave. They went in the cave by saying ”Open Sesame” to the cave entrance. A poor person, named Ali Baba saw them while they were doing that, so he heard the opening word. After they left, he went toward the cave and opened it. Suddenly he found a very large quantity of money and golden treasures. He took some of it and went back home. After that he became a rich man and his brother wanted to know how he became rich.
Ali Baba turned into the richest man in his village. His evil brother was really jealous of him, and wanted to know how he could get such a lot of money. Therefore, when Ali Baba went to the cave again to take some more money, his brother followed him. He saw everything, and decided to go back the next day to take some money for himself. The next morning he found a lot of money in the cave, and he wanted to take all of them. Unfortunately, when he was busy carrying the money to his house, the thieves came. The boss of the thieves asked him how he knew about the cave. He told everything, but unluckily they killed him and went to Ali Baba’s house.
After finding Ali Baba’s house, they made a plan to kill him the following night. Some of the thieves hid in big jars, and the boss pretended that he was a merchant who wanted to sell the jars to Ali Baba. Ali Baba who was a kind man invited the boss of the thief to have lunch together.
After lunch they took a rest. Luckily, the house maid went out of the house, and found that there were thieves inside the jars. She finally boiled hot oil and poured it into the jars to kill all of them. The boss of the thieves was caught, and put into prison.
Ali Baba was saved from the danger, and he finally lived happily ever after with his maid who became his wife shortly after.

============================================================
Golden Eggs
Long time ago a remote village, in central China was inhabited mainly with farmers and hunters. One day, a poor farmer lost his entire livestock to flood. He prayed hard to God for help or his family would die of starvation. Few days later, an old man with long grey beard, passed by his house took pity on him. He gave him a goose and said “ I don’t have any expensive thing to give you and hope this goose will help you to ease your hardship.” A week later to almost surprise the farmer found and egg in his yard. This was no ordinary egg. It was a golden egg. He was suddenly overcome with joy. Thereafter, his livelihood had rapidly improved but the farmer had forgotten his earlier hardship. He became lazy, arrogant and spendthrift. Strangely, the goose only laid one golden egg every six months. The greedy farmer lost his patient and slaughtered his goose thinking there were plenty of golden eggs inside its stomach. Though he very much regretted for his foolishness, it’s already too late.**

In the next morning, he surprised. Pinocchio was alive. He really was happy. He tough Pinocchio how to walk, how to speak, how to read etc. like a teacher. Pinocchio learned fast. He entered an elementary school. One day, Pinocchio felt bored. So, he went home late. Geppetto worried about him. When Pinocchio came to home, Geppetto asked him. He said he was on school but he didn't. Suddenly, Pinocchio's nose grow longer. It meant that Pinocchio lied.

The next day, Pinocchio got caught by thieves. The thieves was the owner of circus. Pinocchio became a slave for the circus. He was famous because he was a talking puppet. Geppetto worried him. Pinocchio didn't come home for 2 days. He found Pinocchio everywhere. When he discovered the sea, big wave smashed him. He was on whale's stomach when he awoke. He couldn't find the way out.
In different place, Pinocchio finally could get out from circus. He went to home but Geppetto wasn't on there. He found Geppetto at sea. He had the same accident like Geppetto. He met Geppetto in whale's stomach. They got out from its stomach by made a fire.
They went home back together. In the end, they lived happy forever after.

It was half past eleven at night and the downpour was showing no signs for stopping. “It looks like you’ll have to spent the night here, Halil.” Said Jabri “No way,” Halil said, “I’ve to be at work early tomorrow morning.”

A few moment later Halil got into the car, started the engine, and said good night to Jibri. Something told him that he shouldn’t have turned off the lane going up the hill, but it was the shortest way home. He knew that lane. It run across an old Chinese cemetery. There were no lights, no cars, no people, just Halil and his old car.

All of a sudden, a white shape appeared in the middle of the lane. Halil shone his beam of light in that direction. The white shape turned to Halil. He saw a pair of crimson eyes staring at him. It was a-long-haired woman in a long white dress. She grinned at Halil.

At once, Halil felt his blood frozen. His heartbeat stopped. His mouth opened but he was speechless. His eyes opened widely in terror.

Suddenly consciousness came into his mind. He quickly reserved his car and sped away just in time.